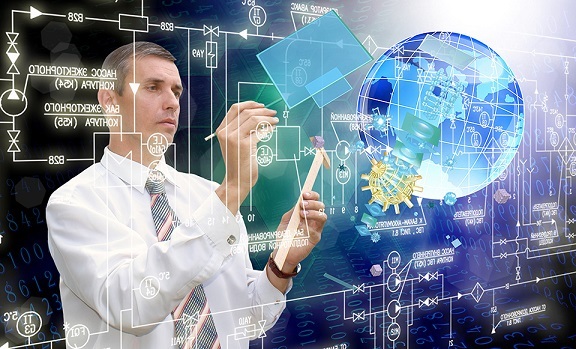 DoubleTalk Carrier‑in‑Carrier is complementary to all advances in modem technology including advanced FEC & modulation techniques.

Figure 1 shows the typical DoubleTalk Carrier-in-Carrier operation, where the two carriers are overlapping, thus sharing the same spectrum. When observed over a spectrum analyzer, only the Composite is visible.

Figure 2 shows the typical full-duplex satellite link, where the two carriers are adjacent to each other.

Carrier #1 and Carrier # 2 are shown in Figure 1 for reference only. 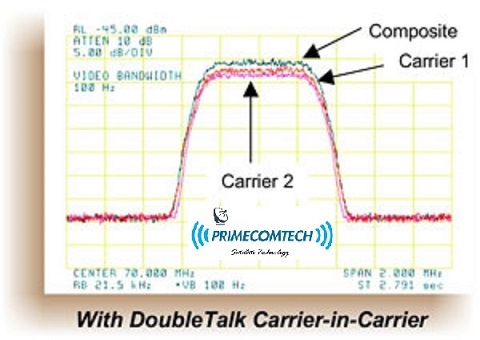 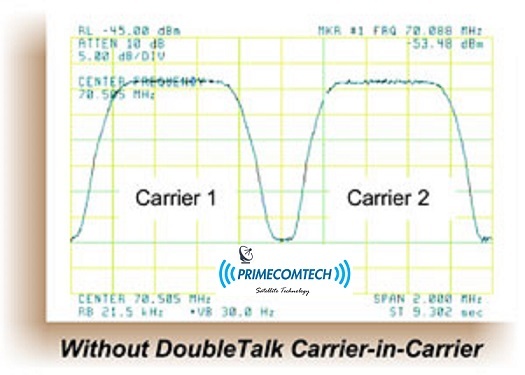 For example, DoubleTalk Carrier-in-Carrier when used with 16-QAM approaches the bandwidth efficiency of 256-QAM (8bps/Hz).

simultaneously reduce CAPEX by allowing a smaller BUC/HPA and/or antenna.DoubleTalk Carrier-in-Carrier can be used to save

The following example illustrates the typical process for implementing DoubleTalk Carrier-in-Carrier in a power-limited scenario:

If both directions transmitted on the same channel, each side would normally find it impossible to extract the desired signal from the aggregate due to interference originating from its local modulator. However, since this interference is produced locally, it is possible to estimate and remove its influence prior to demodulation of the data transmitted from the remote location.

DoubleTalk Carrier-in-Carrier achieves state-of-the-art performance by combining the latest signal processing technology. It continually estimates and tracks all parametric differences between the local uplink signal and its image within the downlink.

Primecom Technologies, LLC, has been a trusted provider of satellite communication systems for more than 11 years.

Throughout the years there have been many changes in the industry, yet one thing remains unchanged. Primcom Technologies' dedication to supplying high quality equipment and services for fractions of the price!

Our mission is to listen to our client's specific needs and deliver high performance products and services through continuous product innovation and operational excellence. We carry complete product lines from VSAT Systems to TV Broadcast Equipment in stock, ready to ship out within 24 hours.

We are a business partner, a trusted provider of comprehensive product lines and infrastructure solutions, backed by a solid guarantee, fast and friendly service, and incredible sourcing capabilities.

Our driving force is to bring quality products at low cost to our dedicated customers!

Great quality satellite uplink equipment and even better price. Can't believe it's only been two days since I purchased it and it's already here!